This blog follows a bit of our personal and professional life, and features images from weddings and portrait sessions we've done, the places we traveled, and the adventures of our combined family-life. It's basically an ever-changing photo album combined with an information source for current and potential clients. Thanks for visiting! 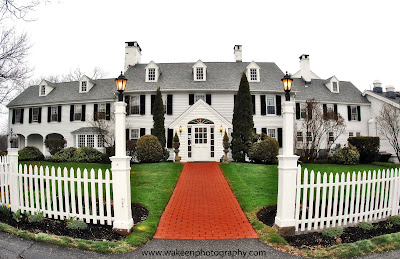 It may have been a drizzly, misty day outside at the Spencer Country Inn on Saturday, but it was summer and sun-shiny in the hearts of Judith and David!  We are thrilled to have been chosen as their photographers as we have a real soft spot for this couple, being somewhat more mature and life-experienced when getting married. (we don't say 'older', we say 'experienced'!)  Having things in common with the couple we're shooting makes the whole process even more intuitive and natural. 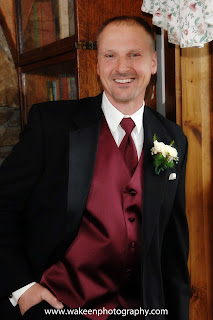 These two are obviously so in love and contented in where they're at.  Judith's sister was matron of honor, excuse me, "caddy of honor" and her two daughters served as caddies-in-training (flower girls).  David's daughter was a junior caddy (bridesmaid) and his son was best caddy (best man).  Both he and his sister presented a well-spoken and humorous tribute to the newly married couple.  Humor abounded all day as the wedding guests were greeted with a life-sized cardboard stand-up of the Three Stooges in golf attire, and even the Justice of Peace (Arthur Tatro), wedding attendants and the couple themselves donned golf caps after a cleverly crafted exchange of vows incorporating a life imbued with golfing.

DJ Dave Wiley did a great job spinning the tunes.  The Spencer Country Inn has refinished the large dance floor in front of the romantic fireplace, and you can literally see yourself in it!   From time to time we were able to scoot outside between drizzle episodes to get some great shots of Judith and David. 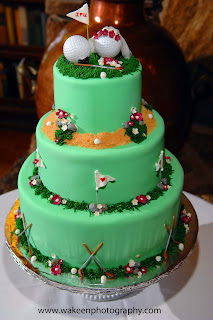 The cake by Carri Allen at Bugaboo Confections was absolutely amazing and tasted even better than amazing!  Judith had arranged for beautiful table centerpieces (golf ball incorporated into the arrangement, of course!) as well as all hers and all the girls' bouquets created by Cohasse Florist.  Even her earrings were golf related!

Wishing you many, many years of happiness guys, and in the words of the famous Arnold Palmer, "Golf is deceptively simple and endlessly complicated; it satisfies the soul and frustrates the intellect... " 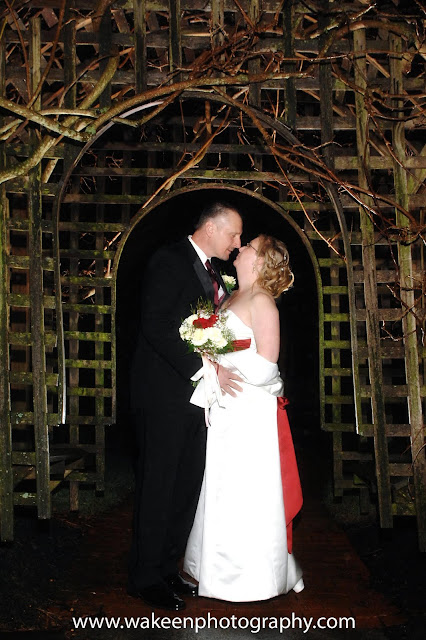 Posted by The Wakeen Photography Blog at 6:05 PM No comments: Links to this post Asking someone who is not a professional wedding photographer to shoot your wedding is like asking a fellow who likes to play in the water to fix your plumbing!  You never know what the results will be and you're taking a real gamble.

Here's an article we found online (apologies to the source - we don't recall where we've seen this)... take a moment to read through and pass along to that friend/cousin/acquaintance you know who says they'd be happy to shoot your wedding since they have a great camera.


So you are an amateur photographer who has been shooting for a while, and everyone in the family has seen you running around with your digital SLR for some time now, and they’ve generally acknowledged that you are the family photographer. You took the pictures of Uncle Charlie’s 50th birthday, and he was pleased with the results, and your sister has asked you to take photos of her kids which turned out good.


Word gets around and your cousin decides that it would save her a lot of money if you would take the photos of her wedding. She says that she has seen your shots and thinks that you would be a great photographer for her big day. You would like to do it, because after all, you just love taking photos, and you feel that while you haven’t shot a wedding before, it can’t be that different or hard. You are very tempted to take her up on her offer and shoot the wedding.


Sound familiar? If it doesn’t yet it probably will one day. Most keen amateur photographers come across this circumstance at some stage in their lives, and many will choose to shoot the wedding. A lot of the time, this turns out OK and the bride and groom are happy with the results. Sometimes, however, the day doesn’t go so well, and the photographer is left with the knowledge that they have messed up one of the most important days of a couple’s life.


I am not saying that all amateur photographers shouldn’t accept the opportunity to photograph a wedding for friends. In fact, many amateurs are truly inspired and competent event photographers and will do an excellent job. What I am saying is that you, as the photographer, need to understand the implications of accepting the job, the skills required to do it competently and successfully, the equipment you will need, and the planning needed to make sure everything runs smoothly on the day.


This article is designed to assist amateur photographers successfully photograph their first wedding. I hope that you find it useful.
BEFORE YOU ACCEPT - CONSIDER THIS:

So as detailed above you have been asked to photograph your first wedding. Before you accept there are a few things you should consider.
Lesson 2 will specifically talk about the techniques and basic photographic knowledge required to successfully shoot a wedding, but you also need to consider your experience in wedding photography, as well as general photography. For example you may be an excellent photographer in general, but with no wedding experience. If this is the case you are not likely to do a good job.

There are several ways to improve your skills in this respect. The best way, and the only real way to fully prepare yourself, is to assist a professional wedding photographer to shoot several weddings. Some professional photographers will be happy to accept the assistance of a keen amateur with an interest in wedding photography, and allow you to be an unpaid assistant. You may not even take a photo for your first several weddings, but you will undoubtedly learn a great deal. This is how I started my photographic career. I learned how to manage the day, what photos to take, what techniques are required, how to deal with brides and guests and many other skills all by assisting a seasoned wedding pro.


If this is impossible the second way to improve your skill is to read text books on wedding photography. Amazon has dozens of different titles that all provide great advice.  I purchased a couple and read them cover to cover before I ever picked up a camera at a wedding. I still regularly purchase books where I see new techniques that interest me, or new poses and styles that I want to experiment with. Simply do a search on Amazon under "wedding photography" to find dozens of titles, all of which are likely to help you in some way. Scour these books not just for hints, but for suitable poses, etc. You want to have practiced these poses well before the wedding to make sure you have them down pat.


You should explain to the couple that while you are a good photographer, wedding photography is a very specialized skill and that they would be well-served to seriously consider hiring a professional before appointing you. Non-photographers often do not understand the difficulties involved, and they may simply think that by hiring you they get the same results but for no cost. You need to disabuse them of this notion. If they want you to have an involvement for a reason, suggest using a professional who will let you assist him. This will enable you to be involved, but the photographer still has the responsibility of delivering the end result.


Another consideration is that by asking you to photograph the wedding they are effectively asking you to work all day for them - this is not like asking someone to make a reading at the wedding or to play the guitar as the bride enters the church. You will be working hard for 6 - 8 hours, and you will not be able to just relax and enjoy the day as other guests will. While this may be fine if it is a cousin or acquaintance getting married, the closer your relationship to the couple, the more important that you are free to interact with family and friends during the events. Remember that if you are photographing the wedding you can't afford to get too involved with the day as a spectator - you need to be looking every moment for that next photograph. In these circumstances the couple will likely get the best photos by you being free to enjoy the event, while another person does the photography. After all, you can always give your best photos to the couple later - without the pressure of being the sole recorder of their day.


While you may be able to do a great job, if you do not the consequences could be dire, and at best they would have the potential to damage your relationship with the couple and spoil their record of their big day. If the couple is not severely financially constrained, or alternatively just doesn't care about the photography you should press strongly for them to involve a professional.

Posted by The Wakeen Photography Blog at 7:42 PM 2 comments: Links to this post